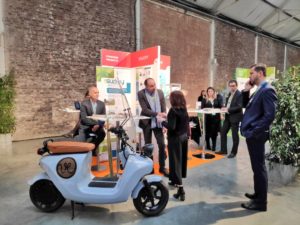 Three weeks ago, SSUCHY was participating in the last edition of the Biobased Industries Joint Undertaking Stakeholder Forum (#BBISF19, 4 of December 2019). The forum was preceded by a one-day private  event encouraging cross-collaboration among the 100 currently active projects. SSUCHY was represented by Vincent Placet (project’s coordinator, UFC), Aart Van Vuure and Pierre Ouagne (Executive Board members, KUL and ENIT). A booth was prepared with the help of IAR and all the project members were involved to collect samples illustrating SSUCHY’s value chains. Icing on the cake: demonstrator of the project – an electrical scooter with a loadframe in hemp fibre composite (one of the demonstrator products targeted in the SSUCHY project) – was kindly lended by NPSP.

The forum gathered more than 650 participants, involved high level international speakers from both public and private sectors. It was a great opportunity to facilitate discussion on the strategic direction for the future of BBI JU program within the frame of Horizon Europe. The booth was a great opportunity to exchange around SSUCHY’s results and to learn about other BBI-JU financed projects

Among the various conversation, SSUCHY’s results had got a strong interest from hemp producers – specially from the UK and eastern Europe sectors. Indeed, hemp biobased reinforcements could be of great market importance for their cooperatives.

Another very active discussions revolved around biobased epoxy. Dieter Brigitta (BBI Project Officer) nicely presented the great opportunities and even greater challenges of biobased Epoxy, mentioning the famous statement “You can make anything you want out of lignin – except money”. One can argue that, based on Graichen and associates’ work (2017) : “Yes, we can make money out of lignin and other bio-based resources”. Indeed, the team of scientists from Scion Research Institute (NZ) intended to show that making lignin economically viable was a possibility using 9 success stories. Additionally, one of the biggest questions lies in the end-of-life of bio-based epoxy. As explained by projects like ECOxy, one of the major drawbacks of biobased epoxy is its current absence of recyclability method and therefore unavoidable incineration of used products. ECOxy’s interesting approach relies on maximizing reparability of its biobased products, while searching for reprocessing-recycling solutions. 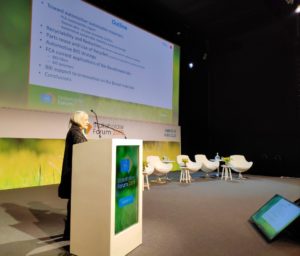 Another highlight was Rosanna Serra’s presentation, Director of Materials Labs & Global Material Leader at Fiat Chrysler Automobiles (FCA). She explained FCA’s ambition was to exclusively integrate new materials with a full circular approach. Such statement is perfectly aligned with SSUCHY’s ambition of developing biobased materials which not only considers current by-products as future resources, but also aims at keeping recyclability and biodegradability at the center of its approach. Indeed, SSUCHY’s value chains starts from two biomass sources: (i) hemp fibers, currently viewed as wastes during yarn making processes, to build woven reinforcement materials and (ii) birchbark from sawmill factories, which after fractionation step, can be further used as building blocks for biobased resins. Ultimately, combining hemp fibers and building blocks to manufacture functionalised biobased composite materials makes a lot of sense for application in the Automotive sector. Surprisingly though, the project barely attracted end users such as automotive manufacturers and suppliers. Which lead the project prepare next steps for maximizing its impact on the overall industrial community

Bioeconomy in general: are we closer to reach a tipping point?

The European Green Deal was officially launched in December 2019, with the ambition of “Becoming the world’s first climate-neutral continent by 2050”. To meet that aspiration, biobased and circular economy should be at the center of the European economic development and in that context, initiatives like BBI-JU could be taken as great success stories.

SSUCHY’s purpose and objectives appears to be aligned with such ambitions, by going beyond the strict TLR progression of the project’s developing technologies. Indeed, broadly speaking, SSUCHY’s is putting a huge effort on targeted valorization of by-products – birch bark – and is betting on crops, like hemp, which could easily contribute to atmospheric carbon dioxide reduction initiatives such as the “4 per 1000”,  given their high rotation and little need in water & nutrients. 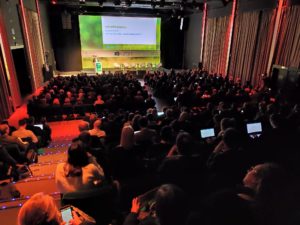 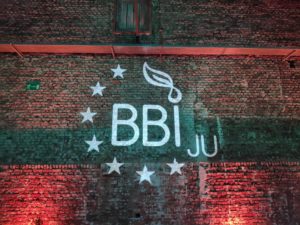